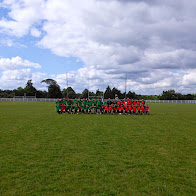 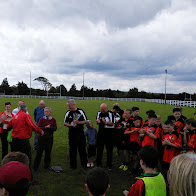 Its a bit late in been posted but here is a report on last Summers successful Feile tournament.

Swinford GAA would like to express our thanks to everyone who helped out at the U14 Feile particularly all the host families. We hope that lifelong friendships have been made with all from Warwickshire GAA.
The players and mentors arrived at Robert McCallion Memorial Park on Thursday evening and were met by the Swinford players and parents and were led into the grounds by the bag pipe playing of Eugene Henry. After some light refreshments the Warwickshire players all headed off with their host families.
The Feile tournament kicked off on Friday and both the Swinford and Warwickshire teams played two games in Ballaghaderren. Swinford were defeated by Dicksboro of Kilkenny and went then beaten in a tight game by St. Mary’s of Sligo. Warwickshire GAA were also defeated by Dicksboro but beat St. Mary’s in their second game. While these games were going on in Ballaghaderreen there was games played at Robert McCallion Memorial Park and Swinford Amenity Park involving teams from Mayo, Sligo, Clare, Derry, Dublin and Waterford.
Swinford GAA hosted a disco for both teams at Swinford Cultural Centre on Friday evening which was well attended and it appeared that all the children had great fun.
On Saturday morning Swinford played Warwickshire at Robert McCallion Memorial Park. Both teams were paraded around the pitch by Eugene Henry playing the bag pipes and the National anthem was sung by Francis McNicholas. It was a very good close game that Warwickshire came out successful 1-7 to 0-5. Following the game Swinford GAA Chairman made a presentation to the Warwickshire management and players. Both teams then went to Ballaghaderreen to play further games but both were unsuccessful in qualifying for the final day in Bekan. Swinford were defeated by a point after extra time against Ballyhaunis. Similar to Friday a number of games were also played at the two grounds in Swinford.
On Sunday morning all the good byes were said at Robert McCallion Memorial Park and the Warwickshire team spent a few hours at Enniscrone before their flight back to East Midlands airport.
Swinford GAA Chairman Shane Campbell said on the Thursday evening that the weekend was about the three F’s Fun, Friendship and Football and these words were repeated on Sunday morning by Noel McMenamon of Warwickshire GAA.
Swinford GAA would like to thank all the U14 players who conducted themselves very well over the entire weekend. They are a credit to their families and to the club and town.

This site uses Akismet to reduce spam. Learn how your comment data is processed.